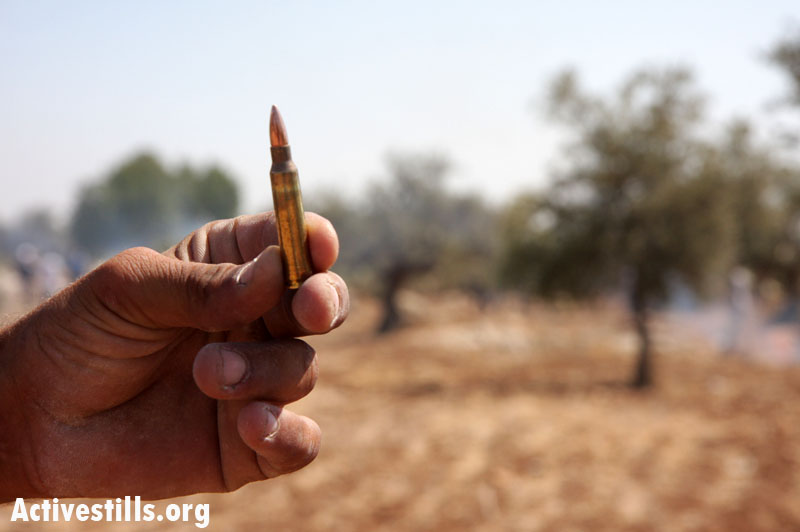 Archived photo: A young Palestinian shows a live bullet during a demonstration against the wall in Ni'lin. Photo by: Anne Paq

This Fridays demonstration in Ni'lin was as usual met with severe force from the Israeli army. Two were injured by tear gas canisters; one man hit in the face and one in the shoulder. A third man was hit with a rubber coated steel bullet in his arm.

The photographer assigned by Ni'lins popular committee was hit in the face while filming the protest, and then later hit again in the neck. This week there was no media coverage of the Ni'lin demonstration, a clear contrast to last weeks Nakba demonstration.

During the demonstration Israeli jeeps pushed the protesters back towards the village. When the demonstration had reached the houses of the village the soldiers started firing tear gas canisters into the houses, causing the suffocation of three women, two children and one elderly man. The affected could be treated on site by the Red Crescent volunteer team.

Meanwhile the fields of Ni'lin was being set on fire by the massive bombardment of hot tear gas canisters. One of the fires ignited some live ammunition shells that had been left behind by Israeli soldiers at a previous occasion. By sheer luck no one was injured as these bullets went flying out of control and in the end the fire could be put out.

There might still be more unfired bullets left behind in the fields that could go off at any time during the hot summer when the fields are likely to catch fire from Israeli tear gas canisters.