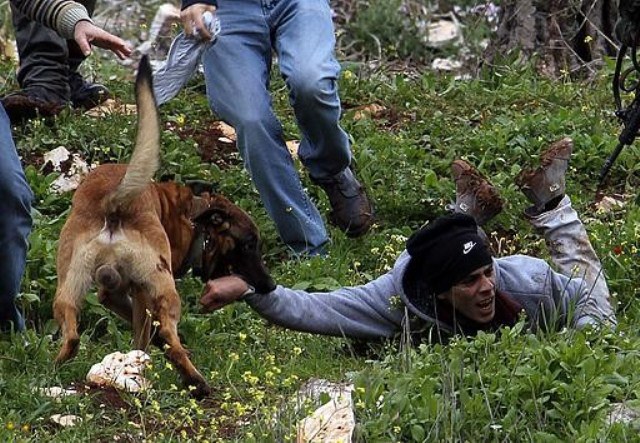 Last Monday 02.03.2015 a new video was published by the Israeli newspaper Maariv showing two Israeli soldiers from the “Aukedz” unit abusing a kid under the age of 12 using two hounds.

The video shows how one of the dogs bite the Palestinian kid in his shoulder and the second dog biting him in his belly while one of the Israeli soldiers are shouting at the kid: ” Tell me now who is the coward you bastard”. All he got in return was the child screams for help.

The report doesn’t clearly tell where exactly this took place.

However, what matters for us is that the Israeli Army hasn't stopped using their dogs to suppress peaceful protests and Palestinian non-violent protesters across the West Bank as they have claimed. In July 2009 during a peaceful protest in my village Ni’lin the Israeli soldiers released a dog at one of the protesters while he was next to his home. The soldiers then attacked him and started beating him with their M16s. The name of this man was Haitham Mousa, 24 years old, and he was in coma for 5 days at Ramallah hospital after this attack.

In March 2012 in Qufur Qaddum, a sister village in popular resistance, Border Police officers decided to send two army dogs at a group of demonstrators, standing several dozens of meters away. The dogs chased after the protesters, and one of them locked his jaws around the arm local protester Ahmad Shtawi.

For some long and painful minutes, the dog would not release its hold of the bleeding arm, even as its handler arrived at the scene and tried to order it to do so. The Border Police officers then arrested Shtawi, despite the fact that he was in obvious need of medical attention.

Trying to defend ourselves against the Israeli military dogs is a huge challenge for us as unarmed protesters. For the Israeli government the life of an Israeli dog is much more precious than the life on a Palestinian human being as we are treated with less rights than animals in our own home.

When I was arrested and sent to the Israeli military jail of Ofir in December of 2008, we held a strike to ask the Israeli private company “Shabas” to respect our rights and treat us well. We asked them to provide us medicine for the sick prisoners and they responded to us by sending in a unit from “Nahshon”, the second highest level of invading units in their private company. They attacked us to force us to break the strike, but since we closed the door, they started firing tear gas at us until they could force the doors open and let in their dogs. One prisoner had a stick in his hand so he hit one of the dogs, the dog fainted, or died, we don’t know. A few days later the guy was taken to military court as he was caught on camera defending against the dog. They added to his sentence the charge of hitting an Israeli dog. His sentence of one year was added to 25 years for injuring an Israeli military dog.

I know that we can’t blame the dogs for this, because they are after all just animals trained to do evil. But it breaks my heart to see how these dogs are way more precious and recognized to have more rights than we do as Palestinians. We don’t have any rights recognized in this world the way that dogs do.

This video published by Maariv is just one incident that was caught and exposed in a plethora of daily Israeli crimes against us. Most of these daily crimes are never shown in to the world and there are a lot more videos that have not been exposed yet and crimes not caught on film, which all has to has an end at some point.