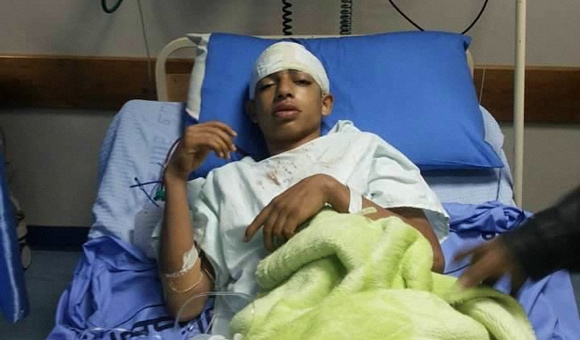 On the 12th of February this year Mamdouh Mahyoub Srour, 17-years old was shot in the neck by Israeli soldiers during a demonstration. The iron clad tear gas canister that hit his neck caused a skull fracture, leading to a brain hemorrhage.

It took two hours of surgery and almost a week in intensive care before Mamduh's condition was stable. Now back in his home in Ni'lin he is still fatigued, stressed and prefers to be alone according to a report from Defense for Children International Palestine (DCIP).

Ayed Abu Eqtaish, Accountability Program Director at DCIP says that “Israeli soldiers who aim crowd control weapons at children’s heads and upper bodies at close range must be held accountable for their actions.”

Ni'lin still bears the painful memories of the death of 10-year old Ahmad Mousa at the hands of Israeli soldiers in 2008. The memories are all the more painful since the soldier who fired the bullet was freed by Israeli courts.

Since October last year DCIP have documented eight cases were Palestinian children have sustained injuries to the head and neck from crowd control weapons fired by Israeli soldiers.  Of these children two have now lost sight in one of their eyes. Seven children have been shot with live ammunition during the same period and according to the United Nations Office for Coordination of Human Affairs (OCHA) at least 2.177 children in the West Bank was injured between October 2015 and January 2016.

The crowd control weapons regularily used by the Israeli army towards protests across the West Bank are called "non-lethal" and their use is restricted by military regulations. However reality tells another story. Anyone who has attended a protest in the West Bank knows that tear gas grenades often are fired straight into crowds, despite regulations.

According to a 2013 report by the Israeli human rights group B'Tselem rubber coated steel bullet "may not be fired at women and children" according to military regulations. The bullets should only be aimed at the legs and fired from a distance of at least 50 meters. However reality offers many tragic examples of bullets fired at the upper parts of the body from close range with lethal outcome. In October last year Ahmad Sharaka, 14 years old died after having been shot behind the ear with a rubber coated steel bullet during clashes near a checkpoint in Al-Bireh.

Since October lat year 42 children have been killed by Israeli forces. Most in connection to "knife attacks" but four children have also died during clashes in the West Bank.

2 thoughts on “Palestinian children in the crosshairs”