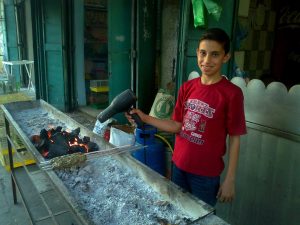 On Thursday evening, December 7th 2017, during the end of an unarmed protest that was organised in Ni’lin village against the occupation and Trump’s decision, my cousin was arrested. A group of Israeli soldiers set up a trap behind the bread shop and the mosque in the village. These are next to the only way protesters take to return to the village’s center.

Upon the arrival of the protesters, the soldiers surprised them by showing up in the village and started shooting live bullets in the air and sound grenades to disturb and divide the crowds. Soldiers started to chase them to arrest as many of them as possible. Fortunately, the majority managed to escape. Except my 14 year-old cousin Ali Amireh and other 2 persons who were arrested. The soldiers took them to an unknown area. Three days later we learnt that they were taken to Ofer military jail and we were asked to put a lawyer for him.

Last week, I got the news that Ali was sentenced for 4 months and a fine of 4000 shekels (980 Euros). If we don't pay the fine, he will spend another 4 months in prison, under the accusation of participating to an “illegal” protest and  “throwing stones”. 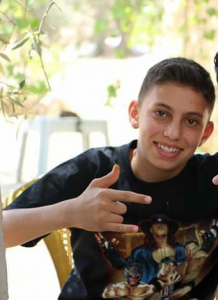 Since Ali is a student in the 10th grade, and the first in his class, the lawyer pushed to reduce his sentence in order to help Ali get out of prison and return to his school to not miss the semester. Losing time in prison at the expense of school can prevent him from reaching the university he wants in the future. I went through this painful experience myself and don't want this to happen to my cousin.

Luckily, after hard work, his lawyer succeeded to get him a “shillsh” court. It is a type of military court allowing to ask for reduced time for prisoners who get arrested for the first time.
His trial will take place on the 11th of February 2018.

If the court decides to reduce the sentence, he will be freed by the end of February at the condition we pay the fine before the 11th of February. The family of Ali is in a difficult economic situation and is unable to afford the price of the fine. They are also very shy to ask people around to help out, especially since they know the situation of many others around them is not much better than their. Meanwhile, his family is worried about him as they are not able to know how he is doing.

We ask all freedom friends, supporters and all people around the world  to help us raise the fine put on Ali before the time of his court, to help bring Ali back home safe to his family and to his school.
We want to send a message to this occupation, that they will never succeed to destroy or stop our dignity, will and resilience.