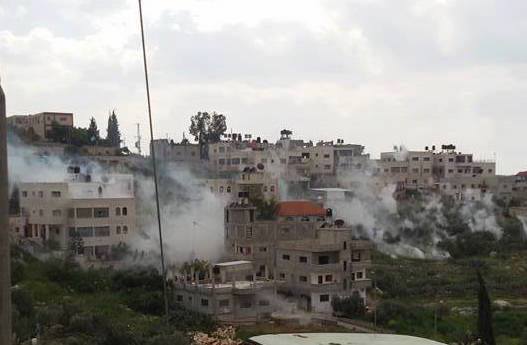 Tear gas clouds inside the village

This Fridays demonstration in Ni’lin commemorated the seventh anniversary of the shooting of Tristan Anderson, the american activist who was shot in the head with a tear gas canister by Israeli soldier on the 13th of March 2009. Anderson spent one year in hospital and, has lost large part of his memory and is still in a wheelchair requiring constant assistance.

The Israeli court that handled Andersons case ruled that since he was in a war zone when he was shot the blame falls upon himself. In this way the Israeli military rids itself of the responsibility for Andersons condition by referring to the repression of a unarmed protest as a war.

This week's demonstration therefore chanted slogans in solidarity with Tristan Anderson and that what was done to him will never be forgiven or forgotten.

Before the demonstration even started Israeli soldiers and jeeps had blocked all of the southern parts of Ni’lin and when approached by the protesters they immediately started firing tear gas at the nearby houses. This is a way to make to people living in the southern parts of the village, who get their windows broken every week, turn against the protesters and  splitting up the village.

This Friday the Israeli soldiers targeted more houses than usual. They broke the windows of seven houses and two shops. The tear gas entered the buildings and caused suffocation for the women and children inside. The streets were also flooded with gas fired from the military jeeps and the families had to flee to the northern parts of the village, where they were welcomed and protected by other villagers.

87 year old Mostafa Amireh, suffering from Alzheimers had a harder time getting to safety however. The tear gas grenades entered his house through the windows and quickly filled the air indoors. Amireh ran out of his house and fainted in the clouds of tear gas surrounding the house. His was saved by his son Sami who took him to an ambulance. Mostafa Amireh was rushed to the hospital where he regained consciousness. 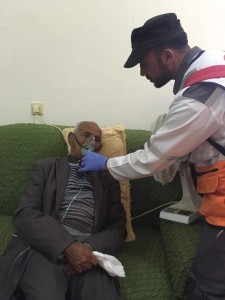 After two hours of clashes the soldiers pulled back and the protesters reached the wall where they burnt tires against it. After this the demonstration was ended but the soldiers returned once more to fill the village with tear gas before they left.

The absence of media and international activists have lead to an escalation of repression against the protests lately.

Seven years after Tristan Anderson was shot in the head with a high velocity tear gas canister, originally developed to break through walls, the Israeli soldiers have returned to the use of these lethal grenades. The grenades have not been used for several years but in the last few weeks protesters have reported seeing these deadly grenades in use against unarmed protesters again.

Eyewitnesses report that the grenades can travel more than 500 meters, weighs around 1 kg and easily breaks through windows.

2 thoughts on “Lethal tear gas canisters back in regular use”